Equestrian Vaulting, or simply vaulting, is most often describes as gymnastic and dance on horseback, which can be practiced both competitively or non-competitively. Vaulting has a well-known history as an equestrian act at the circus, but its origins stretch back at least two-thousand years. It is open to both men and women, and is one of ten equestrian disciplines recognized by the International Federation for Equestrian Sports (FEI), along with dressage, driving, endurance, eventing, horseball, paraequestrian, reining, tent pegging, and jumping. Theraputic or interactive vaulting is also used as an activity for children and adults who may have balance, attention, gross motor skill, or social deficiencies.

Vaulting's enthusiasts are concentrated in Europe and other parts of the Western world. It is well-established in Germany and is growing in other western countries. Vaulting was first introduced in the United States in the 1950s and 60s, but was limited only to California and other west coast areas. More recently, it is gaining popularity throughout the United States.

Some trace the origins of vaulting to Roman games, including acrobatic displays on cantering horses. Others see roots in the bull dancers of ancient Crete. In either case, people have been performing acrobatic and dance-like movements on the backs of moving horses for more than 2,000 years.

Renaissance and middle ages history include numerous references to vaulting or similar activites, and it seems apparent that present-day gymnastics performed on the "vaulting horse" was developed from vaulting - allowing concentration on the gymnastics without (unfortunately) the horse. The present name of the sport comes from the French "La Voltige", which it aquired during the Renaissance, when it was a form of riding drill and agility exercise for knights and noblemen. Perhaps vaulting's most prominent recognition as a form of equestrian sport in more recent times was its inclusion as "artistic riding" by calvary officers in the 1920 Olympic Games. 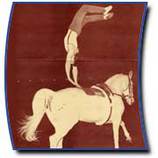 Modern vaulting was developed in post-war Germany to introduce children to equestrian sports. In 1983, vaulting became one of only seven disciplines recognized by the Federation Equestre International (FEI), and the first FEI World Vaulting Championships were held in Switzerland in 1986.

Vaulting in America and the AVA

American vaulting can be traced to 1956, when Elizabeth Searle first saw the sport during a visit to Europe. Seeing a potential application for her pony club in California's Santa Cruz County, she obtained a 16mm film of the basic exercises, and took it back to America.

Later, in 1966, the American Vaulting Association was founded by Searle and J. Ashton Moore, and in 1969, held the first official AVA competition at the Santa Cruz County fairgrounds in Watsonville, California. In 1974, U.S. vaulters participated in the first international exchange in Stuttgart, Germany.

AVA members demonstrated vaulting at the 1984 Summer Olympics in Los Angeles, and again at the Atlanta Olympic games in 1996. Today the AVA has more than 1,000 members in 100 AVA clubs and affiliates from Hawaii to Massachusetts, and Washington to Florida. Originally focused solely on competitive vaulting, the AVA today has programs for all types of vaulters, from recreational and pony club vaulters to therapeutic vaulters, from beginner to world championship levels.

For more information on vaulting in the United States see the pages of the American Vaulting Association at www.americanvaulting.org